The Garden is full of Metal : homage to Derek Jarman 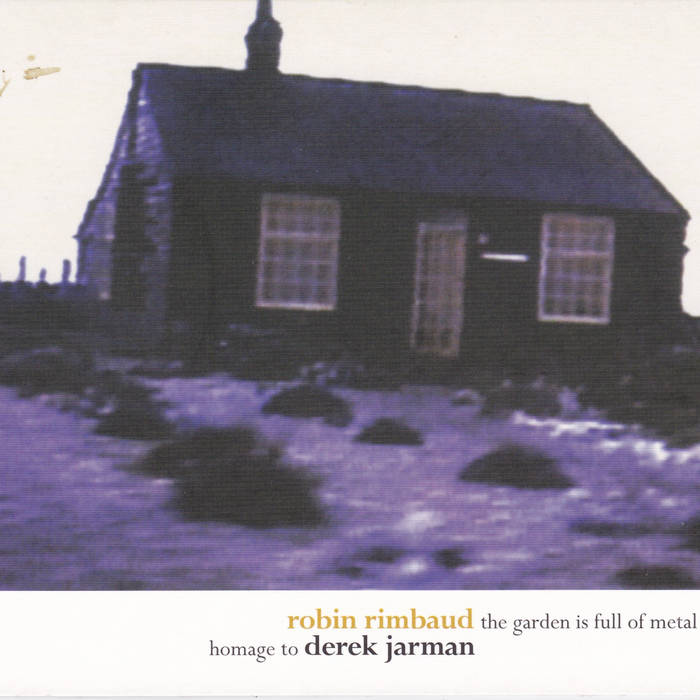 pəˈjoʊti Derek Jarman: I have no friends now who are not dead or dying
Favorite track: Experience.

Robin Rimbaud was both a friend and collaborator over the years and this CD is his tribute to an important figure in both his life and others'. Using recordings of Jarman's voice as well as location recordings around his home, he creates a graceful and delicate sculpture in sound. This is a close friend's tribute, backed by a profound understanding of the filmmaker's sense of intimacy, atmosphere and drama.

2014 - on the 20th anniversary of the passing of Derek Jarman and this reissue Robin Rimbaud (aka Scanner) reviewed many of the materials in his archive and discovered four selections that were originally off the release but feel now that they offer another viewing.

"This is a creative mind and man I still miss, but who thankfully and finally seems to be receiving the accolation he should have received long ago." (Robin Rimbaud)

"A beautiful and fragile tapestry. Reflective, tactile and emotional."The Wire

"This music operates a certain unsettling, eerie magic on the listener, sneaking out of the speakers surreptitiously and filling the room like a sudden burst of sunlight. Even those unaware of Jarman's flicks will be moved." NME

This album is a collection of memories taking recordings from spaces that Jarman inhabited or experienced - from the walk to the sea's edge from his cottage in Dungeness through to the roar of London congestion around his Charing Cross flat - Robin has attempted to create a fluid, elegiac sound portrait, a form of resonant landscape painting that weaves through recordings of Jarman's own voice. Robin applied the term 'sound polaroids' to describe these intimate, isolated, improvised moments, the same way a polaroid camera captures an image for a moment, almost dispoable, forgotten, a tiny epiphany that dwells within but surfaces at unexpetcetd triggers.
The majority of the sound here is abstracted and processed through modest means, cutting, stretching and editing tape - acoustic data like this once digitised dissolves into a form that one can mould and re-shape in an almost scultural manner.

Derek Jarman was one of England's greatest cinematic visionairies. Spanning painting, theatre, film, he comfortably moved between genres, seemingly shape -shifting at will. From designing ballet and theatre in the sixties for Frederick Ashton and Ken Russell, through to his own films in super-8 and seminal features such as Sebastiane (1976), Jubilee (1978), The Last of England (1987) and Blue (1993), Jarman explored a unique and compelling vision until his death from AIDS in 1994.
This record was an homage to film director Derek Jarman. It was released with a short film by Guy Marc Hinant shot on location in Jarman's garden. Published in 1997, it was the second full-length album by Robin Rimbaud / Scanner on Sub Rosa.

If you like The Garden is full of Metal : homage to Derek Jarman, you may also like:

Bandcamp Daily  your guide to the world of Bandcamp

Featured sounds by K.Spark and WIZDUMB, plus Basi joins the show to discuss his latest release.